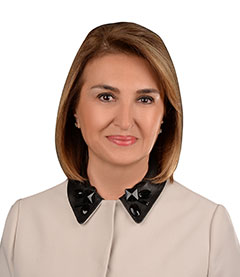 Nalan Erkarakaş graduated from Ankara University, Faculty of Political Science, Department of Economics/Finance and began her career in 1983, as an Expert at the Capital Markets Board. Taking an active part in the establishment and development of capital markets and exchanges in the period 1983-1989, Erkarakaş was enrolled in the Capital Markets Certification Program at the Wharton School of the University of Pennsylvania in 1987-1988. Having moved on to the private sector in 1989, she worked as the Junior Financial Coordinator at Çimentaş T.A.Ş., followed by her tenure between 1991 and 2002 at a number of positions including Vice President for investment banking in the finance sector, and General Director and Chairman of a brokerage house and portfolio management firm and eventually her transfer to real sector in 2002, assuming the position of Ciner Group’s Capital Markets Group President. Through the years she served as Deputy Chairman in the group’s publicly listed companies, as well as Board Member in a number of firms operating in media, aviation, energy and mining industries where the group operates, In 1997, she received the Executive of the Year award from the Young Executive Businessmen Association, followed in 2000 by the Successful Businesswoman of the Year award from Dünya Daily. Nalan Erkarakaş currently serves as the Chairman of the Board of Directors of KOTEDER (Exchange-Listed Corporations Association) which serves as the umbrella organization for publicly listed firms. Through the association, she engages in joint efforts with the Capital Markets Board and Istanbul Stock Exchange, not to mention the Turkish Capital Markets Association. Nalan Erkarakaş is also an assembly member in TÜGİAD, TKYD, TÜYİD, BAKYD, and TOBB capital markets. In February 2018, she joined Grant Thornton as the Partner for access to capital markets within the framework of financial services, financial restructuring, corporate management and financial risk management services. Nalan Erkarakaş is married and the mother of a girl and serves as the Deputy Chairman of the Board of Directors at Koruncuk Foundation for Children in Need of Protection as part of her charity work