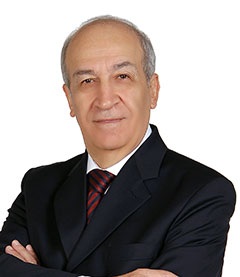 He completed his high school education at Eskisehir Ozel Yeni College and his lisence degree at E.İ.T.İ.A. He started his postgraduate studies at Bursa İ.T.İ.A and was qualified for the title of Doctor in 1976 and the title of Assistant Proffessor in 1978. During his postgraduate studies, he took an intensive language education for professional terminology in London Pitman School of English. In 1981, he resigned from his academic position in Uludağ University, Faculty of Economics and Administration with his own will and he started his career in multi-national companies as a senior manager responsible from financial affairs until January 1992. During those years, he gave lectures in various faculties on subjects of Accounting, Audit and Tax as a lecturer. In 1992, he received the title of Chartered Accountant and was the chairman of Bursa Chamber of Chartered Accountants since 1992 until 2000 and still continues his professional activity as a Chartered Accountant in Bursa.