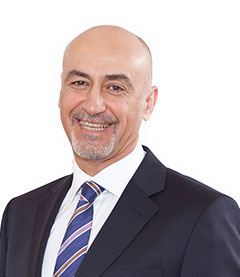 After graduating from Ankara University, Faculty of Political Sciences, Department of Economics / Finance in 1978, Mr. Taylan began his career in the Ministry of Finance, General Directorate of Exports. After a tenure as a research assistant at the Department of Finance of Çukurova University, he took foreign language courses at Michigan State University in the USA. Upon his return to Turkey, he succeeded in the hiring exam by the Ministry of Treasury, Tax Inspectors Board, and worked first as a Deputy Tax Inspector and then as a Tax Inspector at the Ministry of Finance in the period 1981-1987. During his tenure at the Ministry of Finance, in 1985, he was invited to participate in a 4-months seminar on Japanese Tax System, and represented Turkey at the event. Having resigned from the Ministry by the end of 1987, Emin Taylan joined STFA, one of the leading contracting groups of Turkey, and served as the Vice President, General Director, Member and Chairman of the Executive Committee, and Member of the Board of Directors at the energy and telecommunications firm of the group. After he left the group, Mr. Taylan started to work as a Sworn-in Certified Public Accountant. Between 2001 and 2009, he worked as a partner at Grant Thornton’s Ankara office. Thereafter, he moved to Istanbul where he continued his work. Having assumed the position of Vice President for Tax and Accounting Services since 2015, Emin Taylan was named as the Managing Partner at Grant Thornton Turkey, as of July 2018. Mr. Taylan’s career also included service at the Board of Auditors of the Central Bank of Turkey between 2000 and 2002, not to mention addresses at various panels and seminars all through these years. He is also the acclaimed author of various pieces in economics journals and newspapers.